The lesson of Hungarian intervention: how the Orbán government created a conflict with another state

In Ukrainian-Hungarian relations, which are already very difficult and have been in a state of permanent crisis since 2017, there are sometimes outbreaks, against which the previous problems seem smaller. This happens when Budapest tries to interfere in Ukrainian domestic politics - either by statements or actions - for example, campaigning for one of the Ukrainian parties.

And this week, Hungary's other neighbor, Slovakia, which is also home to many ethnic Hungarians, found itself in exactly the same situation.

Peter Siyyarto, known to us, became an antihero in Slovakia.

The history of this conflict (which, by the way, is not over yet) illustrates that Ukraine is not alone in its troubled relations with the current Hungarian government.

Moreover, the Slovak experience proves that Hungary's claims to Ukraine regarding the alleged "oppression" and "restriction of the rights" of national minorities are unfounded. After all, the Slovak legislation on minorities is incomparably stricter than the one in force in Ukraine.

A slap from Budapest

European Truth told a lot last week about Slovakia, where the crisis is now flaring up over the prime minister's decision to buy a large batch of Russian Sputnik V vaccine. Yes, this is exactly the prime minister who made a bad joke about Ukraine and was forced to make an official apology to our country.

But behind these events and statements, another story came to mind - perhaps even more important for Kyiv. Because it gives us the experience we desperately need to communicate with our other neighbor, Hungary. Because although from time to time it may seem from Ukraine that Budapest has claims only to our state, in fact similar conflicts sometimes arise with all neighbors where a large Hungarian diaspora lives.

It all started when the Slovak parliament decided to change the law on citizenship.

The fact is that dual citizenship is now strictly prohibited in this state. If someone finds a passport of another state obtained without relinquishing Slovak citizenship, the person is deprived of a Slovak passport.

This norm was introduced by the Slovaks 10 years ago, and it was a response to the then actions of Hungary, which began mass distribution of its passports to ethnic Hungarians in all neighboring countries - as well as in Transcarpathia. But time has passed, and now in Bratislava they admit that the ban is too strict for them, and decided to add an exception for the Slovak diaspora, so as not to "punish" by deprivation of citizenship those who moved to permanent residence abroad, but want to keep ties with the Motherland.

It was here that the Hungarian authorities re-entered the arena.

Budapest has stated that it also wants to take part in discussions on changing Slovak legislation.

Once again: Hungary wants to join the development of Slovak law!

Nonsense? So. But this is exactly the request that came to Bratislava: the well-known Ukrainian Foreign Minister Peter Siyyarto sent a request to a meeting with Slovak officials dedicated to this issue.

The Slovak Foreign Ministry, of course, refused and stressed that it considered it unacceptable for foreigners to participate in their domestic political decisions. But this did not stop Siyarto.

Ignoring the warnings of the Slovak authorities, he went on an unannounced, uncoordinated visit to the south of Slovakia, to the town of Komarno, where more than half of the population is ethnic Hungarian. There, he met with Slovak MP Dordem Dimesi, a Hungarian by nationality who is a member of Slovakia's main coalition party. 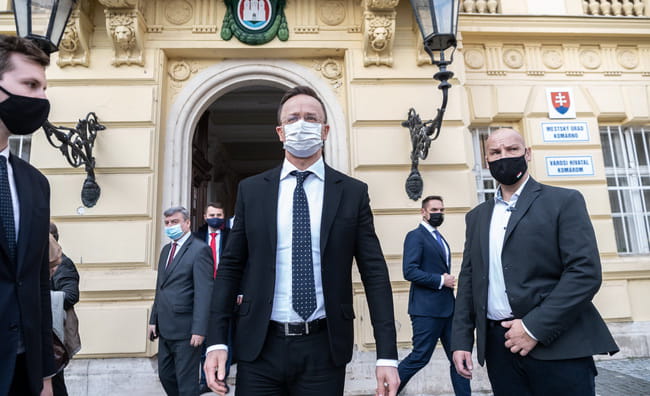 And to finally dispel doubts that this was not just a meeting, but a slap in the face to the Slovak authorities in response to the refusal to travel to Bratislava, Siyarto immediately said that he was discussing a forbidden issue for him - how to change Slovakia's citizenship law. Of course, demanding that Slovak Hungarians be officially allowed to obtain Hungarian passports.

Slovakia's reaction to this was lightning fast.

Given that the actions of the Hungarian authorities were demonstratively public - Bratislava responded in the same way.

The Hungarian ambassador was summoned to the Foreign Ministry, and a large post was posted on the ministry's website on behalf of Minister Ivan Korchok (the same one who was the first to apologize to Ukraine for his prime minister's "joke" about Transcarpathia).

The minister did not try to be diplomatic. He stressed that Peter Siyarto's actions "crossed all boundaries":

"We want to have good neighborly relations with Hungary, but I will not allow it to interfere in our internal affairs."

Ivan Korczok's statement also showed that he is well aware of what Hungarian experts have been saying for a long time, but, for reasons of political correctness, prefer not to say that the Hungarian distribution of Hungarian passports has nothing to do with "caring for Hungarians abroad." as official Budapest tries to present it.

Everything is much more prosaic. each passport issued abroad is a +1 voter. And foreign Hungarians are almost guaranteed to vote for the current Hungarian government, ie for Viktor Orbán's Fidesz party.

"It is clear that it is important that as many Slovak Hungarians as possible take part in the elections in Hungary," Korczok added in a statement on the Foreign Ministry's website.

We have already mentioned that a political crisis is raging in Slovakia. The coalition is on the verge of collapse, many are predicting re-elections and are even working to bring them closer, so it is not surprising that not everyone supported Ivan Korchok.

Do you remember the story with Prime Minister Matovych, who recently insulted Ukraine with his "joke" about Transcarpathia? In Hungarian history, he again behaved "unconventionally" and sided with Siyarto in this conflict. The prime minister, who is currently in a heated conflict with Minister Korczak, has decided to scold him for criticizing the Hungarian minister, saying that he should not insult his neighbors.

But as a result, the prime minister himself was criticized.

The Slovak media were outraged by his actions and responded with headlines such as "Matovic is behaving like a member of Orban's party" or "Matovic is destroying Slovak diplomacy."

It is important to note that the Prime Minister was one of the very few Slovak politicians to side with the Hungarian authorities in this dispute. Instead, Peter Siyyarto's actions outraged the vast majority of Slovak political players from various flanks, from the former Smer-SD ruling party to the almost pro-Russian We Are Family, whose leader, Parliament Speaker Boris Kollar, said the situation was so obvious he was ready to stand by. their ideological enemies in opposition to the actions of the Hungarian government.

"It is unacceptable and unacceptable that a foreign state is starting to get involved in our internal affairs. This is an absolute scandal!" He resented.

In Slovakia, by the way, they are well aware that Hungary has acted in a similar way in Ukraine, trying to force the Ukrainian authorities to consult with them on changes in legislation - but without success. Both the current and at least two previous governments have categorically rejected this possibility.

Moreover, in Bratislava, even officials refer to the tragic pages of Ukrainian history when explaining why they oppose the uncontrolled distribution of Hungarian passports. Slovak Foreign Minister Martin Kluss reminded that it was a question of security. "This is a fact - in the East of Ukraine and in some regions of Georgia, the distribution of citizenship (of the Russian Federation) has literally created a security threat," he explained. And although this comparison caused another wave of outrage in Budapest, the Slovak government remained steadfast.

At the same time, however, the Slovak government hastened to declare that it valued the Hungarian minority with the Hungarian authorities and was ready to support it in every possible way. But the intervention of a neighboring state in its affairs will be severely stopped

In conclusion, it is not a fact that Ukraine needs to "literally" copy Slovakia's passport policy. Each country has a different situation and actions may also differ.

But there is something that we should definitely learn from the Slovak-Hungarian dispute.

This story illustrates once again that we are far from the only country that has recently had problems with Victor Orban's desire to use the national map as the core of his election campaign. This is a reality that almost all of Hungary's neighbors face one after another.

But despite the fact that Budapest knows how to press and do it hard, in no case can we give in to national interests.

It is gratifying that over the years of disputes with Hungary, we have allegedly learned this.