Not only through Crimea: why it is important for Zelensky to elect Sandu as President of Moldova

16 November in the Republic of Moldova held the second round of presidential elections, the results of which won a landslide victory Maya Sandu.

President of Ukraine Volodymyr Zelensky was not only one of the first heads of state to congratulate Maya Sanda on her election, but also had a separate telephone conversation with her this morning.

Promptness and openness to dialogue are not accidental. After all, this is a neighboring state, with which Ukraine has more than 1,200 km of common border, where more than 180,000 Ukrainians live.

In fact, Volodymyr Zelensky and Maya Sandu have known each other personally since July 2019. At the time, she was visiting Kyiv as Prime Minister of the Republic of Moldova. Since then, a warm relationship has developed between them. And I will note that even then, during last year's talks, we saw Mai Sandu's constructive approach, her openness to deepening good neighborly and partnership relations with Ukraine.

That is why her election as president is especially important.

After all, for some reason, in recent years, the bilateral dialogue between Ukraine and Moldova has slowed down considerably, and contacts at the level of heads of state have been suspended.

Crimea is Ukraine. This fact is undoubted, and it is fundamental for our state and personally for President Zelensky. Therefore, Mai Sandu's victory is important from the point of view of fixing the invariability of Chisinau's policy of supporting Ukraine's sovereignty and territorial integrity within its internationally recognized borders.

The election of Sandu is also a confirmation of the invariability of Moldova's European choice, its movement towards European reforms. Here our approaches completely coincide. In particular, Ukraine and Moldova, along with Georgia, are the most active participants in the EU's Eastern Partnership initiative.

And it is good that Moldova will remain so in the future.

Finally, the obvious victory of Mai Sandu is important in terms of security and stability in Moldova, in our region, and on the European continent as a whole. We sincerely hope that fears of possible unrest in Moldova, including those inspired from outside, will not be confirmed. This is very important, in particular, given the current development of the situation in Belarus and the recent escalation of the Nagorno-Karabakh conflict.

Thus, the results of the presidential election in Moldova open a window of opportunity for a real reset of the Ukrainian-Moldovan partnership.

First of all, we are talking about intensifying the political dialogue at the level of heads of state - so we need to make such a dialogue permanent. For example, perhaps the possibility of launching annual meetings in the format of the Presidential Council should be considered together with Moldovan partners.

Efforts should also be made to restore the dynamics of trade and economic cooperation that has been negatively affected by the coronavirus pandemic. To this end, it is necessary to initiate a regular meeting of the Ukrainian-Moldovan intergovernmental commission on trade and economic cooperation. I am convinced that the co-chairman of the Ukrainian part of the commission, Deputy Prime Minister Oleksiy Reznikov, will be able to agree on the modalities of such a meeting with his Moldovan counterpart in the near future.

We are also open to the implementation of infrastructure projects. The set of issues here is known, we need to act quickly.

In general, the range of promising areas of cooperation between our states is very wide. In addition, the agenda includes a number of topical issues that have accumulated over the years, including under the previous government, both in Moldova and in Ukraine.

To discuss them substantively and find mutually acceptable solutions, President Zelensky has already invited Maya Sandu to pay an official visit to Ukraine.

We believe that such a visit will take place in early 2021, and the epidemiological situation will not interfere with our plans. 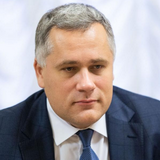 IGOR ZHOVKVA
Deputy Head of the Office of the President of Ukraine, Diplomatic Adviser to President Zelensky
© 2014-2020, Європейська правда, eurointegration.com.ua