If not Merkel, then who? The ruling party is seeking a replacement for the chancellor

Soon, in December, German Chancellor Angela Merkel's party, the Christian Democratic Union (CDU), is to elect its new leader. This becomes especially important as the new party leader almost automatically becomes the main candidate for the post of chancellor.

Previous election schedules have been significantly altered by the COVID-19 pandemic and the resulting economic downturn.

As a result of the successful anti-crisis steps of the current cabinet, the government itself, Angela Merkel personally and the CDU have regained a high level of public confidence.

However, even the current level of trust of more than 70% is not an argument for the Chancellor to return to the CDU leadership.

At the same time, Merkel's success reduced the chances of her critics winning, especially the former head of the CDU / CSU faction in the Bundestag, Friedrich Merz. Currently, only 30% of Germans consider him a worthy candidate for leadership in the CDU / CSU electoral list. Even worse (only 19%) is the prime minister of North Rhine-Westphalia, Armin Lachet, who, meanwhile, is still considered by many in the party to be the main contender for the CDU leadership.

Under such conditions, the election of a new leader of the Merkel party, as well as his weight after the election, can bring the most unexpected result. In particular, the CDU may resign as chancellor and nominate a "foreign" person to head the government.

An ally, but not his own

One of the most unexpected solutions to the "chancellor's question" in the CDU would be to nominate a candidate from the Bavarian ally of the Christian Democrats, the Christian Social Union.

In this case, it is the current leader of the CSU and the Bavarian Prime Minister Marcus Zoeder.

During the "coronary crisis", Bavaria became the first and almost the key center for the spread of COVID-19 in Germany - in the region recorded more than 48 thousand cases of infection.

In addition, the Bavarian economy, traditionally one of the largest among the German states, was no less significantly affected by the economic consequences of the epidemic. According to the Institute for Economic Research in Munich, the losses from the pandemic and lockdown range from 49 to 94 billion euros.

Moreover, according to Kantar, 45% of respondents consider the CSU leader to be the most acceptable candidate for chancellor.

And while the pandemic and economic crisis continue, ratings of confidence in politicians do not seem very stable, delegates to the December congress of the CDU will obviously have to think seriously about the possibility of running under the leadership of the Bavarian prime minister. 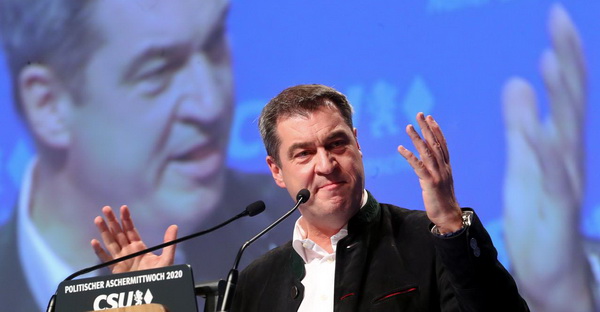 Arguments against the "Chancellor of the Hofbräuhaus"

On the other hand, the experience of two election campaigns lost by the Christian Democrats under the leadership of the CSU leaders is not in favor of Soder.

These include the 1980 Bundestag elections, led by longtime federal minister and Bavarian prime minister Franz Josef Strauss, and the 2002 race, in which then-Bavarian Prime Minister Edmund Stoiber was elected chancellor.

In both campaigns, the Christian Democrats lost to the Social Democrats.

By the way, the same Stoiber, answering questions from journalists about the possible candidacy of Zoeder for chancellor from the CDU, said that he would advise the incumbent Bavarian prime minister to continue in office and lead the party in the next elections to the Landtag.

So it will not be easy for the incumbent Bavarian prime minister to fight for the CDU / CSU bloc. However, the levels of general confidence in the Bavarian Prime Minister, the Christian Democrats in general and the willingness to see Soder as Chancellor are high, so he has a chance to fight for such an opportunity.

However, this does not remove the need for the chairman of the CSU to convince fellow party members from northern and eastern Germany that the election will not result in the country, in the words of Söder himself, a "government from the Hofbräuhaus" (Munich's largest brewery).

At the same time, the biggest issue for the Bavarian prime minister as a potential candidate for chancellor will be support in the eastern lands.

On the one hand, Zoder combines tougher rhetoric with the migration agenda with local heads of land branches of the CDU and attempts to oppose the strengthening of right-wing populists from the "Alternative for Germany". On the other hand, the election of the incumbent Bavarian prime minister as a candidate for chancellor will mean the triumph of the richest federal state, much of whose residents believe that their taxes subsidize the economically weaker "eastern lands".

If Zoder is nominated as a candidate for chancellor, he will have to think about what his ruling coalition will look like.

After all, the most probable government schedule today is the union of Christian Democrats with the Union90 / Greens. Zoder has an ambiguous relationship with this party, primarily due to worldview differences and views on migration policy.

However, on European policy issues, the agenda of the CSU and the Union90 / Greens largely coincides. Both political forces support the "economic reconstruction fund" proposed by Chancellor Merkel and French President Macron and the need for a more ambitious climate policy at EU level.

But regardless of whether the Bavarian becomes a candidate for chancellor from the CDU / CSU bloc, another race awaits the party. Merkel's party must decide on its leader.

For the Christian Democrats, the fact that they will cede leadership to the Bavarian regional party CSU will mean an extremely heated debate over party leadership. After all, Söder's main rivals - Armin Laschet and Friedrich Merz - clearly point to the need to combine leadership in the party with the candidacy for chancellor.

Accordingly, if Zoeder heads the CDU / CSU list, he will either have to negotiate with the above-mentioned rivals, or the CDU must find another influential candidate for leadership who would not mind remaining "second" in the parliamentary elections.

One such candidate could be Norbert Röttgen, chairman of the Bundestag's foreign affairs committee and a comparable outsider in the current informal CDU leadership race.

In an interview with Frankfurter Allgemeine, he hinted that the CDU chairman does not have to be a candidate for chancellor, ie that he has put himself in the role of an acceptable partner for Zoeder if he still decides to run for chancellor from the CDU / CSU.

And this is not the last problem for the ruling party.

The CDU owes its current high ratings to its trust in Chancellor Merkel.

Therefore, it is unknown how the voter will perceive the change of the leading figure in the party. Even if the rating Zoder is still running for the post of prime minister.

After all, if he is elected to the top of the CDU / CSU list, the deepening economic crisis, the unsuccessful results of the Christian Democrats in the local elections in the six federal states scheduled for 2021 before the Bundestag vote, and even the cultural and mental differences between the Germans may play a role. federal lands.

On the other hand, it should be noted that with the exception of Zöder (as well as Angela Merkel, who can no longer be counted on), the Christian Democrats have no other rating and colorful candidate for the first place in the electoral list.